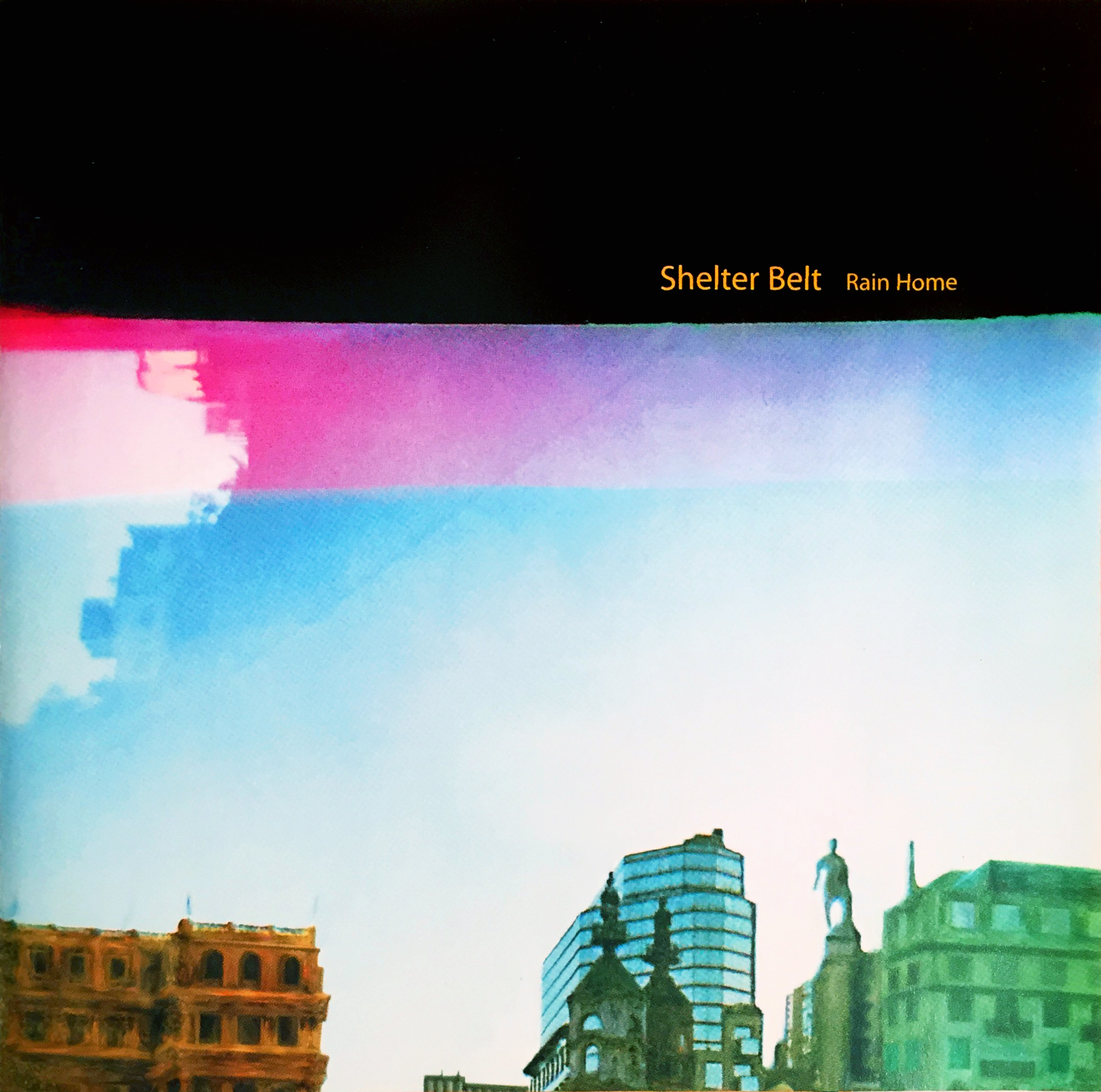 6. Comfort (You Know My Address)

10. The Way You Turn Around

“Four times through listening to “Rain Home”, I still don’t quite have a handle on their sound. It’s sophisticated pop that spreads its wings and soars with ever-changing instrumentation.”
—Aimsel Ponti of the Portland Press-Herald (Portland, Maine)

“Shelter Belt uses its size to its advantage. The band juxtaposes strings with electronic beats into an oddly appealing blend of techno beats, bass, and honky-tonkin’.”
—Stephen Slaybaugh of Alive (Columbus, Ohio)

“Shelter Belt is an eclectic indie band which jumps through all sorts of stylistic hoops, creating lush sonic structures and incredibly interesting songs. The production is well done, but not overly slick. The musicianship is incredible. At the heart of the album is a wonderful pallet of colorful sounds blended together on this broad canvas of a CD. Not one song resembles another, yet each flows effortlessly into the next.”
—Michael J. Salamone of the Chautauqua Region Word (Chautauqua, New York)

“Utilizing violins, trumpets, trombones, clarinet, French horn, and the usual instruments, Shelter Belt’s CD Rain Home is difficult to describe. The slow songs glide through electronics and classical styling while the more upbeat numbers highlight eclectic sounding rock & roll. There are also moments when the band hits up a banjo for a Midwestern update of jazzy folk. There is something for every ear to perk up to.”
—Andrew Olson of The Northland Enquirer (Duluth, Minnesota)

“Especially charming is Shelter Belt, a seven-member pop/world band that plays musical chairs with its instruments. The band’s sound absorbs chimes, cello and banjo as easily as it experiments with electronic sounds. The result is a versatility and variety few bands can match.”
—Sarah Henning of The Duluth News Tribune (Duluth, Minnesota)

“This CD is virtually impossible to classify because every single song has a different sound. Each song has a unique blend of instruments and complex arrangements, but at the same time the sound is simple enough to not overpower the smooth vocals put forth by all the singers in the band. Shelter Belt is one of the most original sounding bands I’ve heard in years.”
—Nathan Leete of the Iowa Western Community College Rover (Council Bluffs, Iowa)

“Rain Home showcases a homegrown invention that is rich in creation track after track. Their creation displays top-notch talents of young, yet knowledgeable musicians as they develop their sound further.”
—Kent Lutt of the University of Nebraska-Kearney Antelope (Kearney, Nebraska)

“Shelter Belt has done something brilliant. Transforming itself into a magnitude of musical genres from one song to the next, the band will never bore you on its latest, “Rain Home.” The reasons behind this are solid ones. The fact that the seven members of the electro-pop band often swap lead vocals and instruments, never staying consistent on who gets what, keeps the creativity alive. Playing around with electronics (ranging from guitars to chimes), screaming brass sections and unpredictable string arrangements, Shelter Belt will keep you on your toes. “Rain Home” is as original and diverse as they come.”
—Katie Piepel of the Iowa State Daily (Ames, Iowa)

“Shelter Belt is Omaha’s latest up and coming band. Shelter Belt’s sound is complex but controlled, oozing with local influences yet still original and fresh in its own right.”
—Nick Turner of The Omaha Pulp (Omaha, Nebraksa)

“The disc is perhaps the most eclectic and original album to be released in the area over the past couple years. It’s hard to even describe the Belt’s sound, as they change gears time and time again. Some of the disc has this crazy 80’s vibe to it, with a driving beat and almost danceable tempo, while other parts are much more slow and moody, complete with tremendously soulful vocals. I am confident that Rain Home will catch many people by surprise once they hear it, especially anyone who just loves good music.”
—Joe Vavak of Somedaynever.com (Omaha, Nebraksa)